A favorite model makes goofy faces at me instead of modeling.

A fellow artist complimented a figure drawing of mine recently.

“I like your compositions,” he said. “How do you work them out?”

“I don’t think about composition,” I replied. “I work intuitively. Spontaneously. I don’t plan anything ahead of time. I just draw, and trust that subconsciously I know what to do.”

There was a time, long, long ago, when I worried about composition, balance, rhythm, palette, focus, etc.  –  –  all the things one studies in art school, the details that art critics talk about.  I assume I internalized all those considerations and moved on, because I don’t think about them anymore. Not while I’m working. After I finish a piece I may take a more critical look at the work, but only for a moment or two to note what I like and don’t like  –  –  what works and doesn’t work. If I don’t like a composition, I may crop the drawing. It’s an old habit from my graphic design days.

The quick, intuitive approach works well for figure drawing. I find the lines in line work to be extraordinarily expressive. They can be bold or hesitant. Spontaneous or tentative. Forceful. Subtle. Sensitive. Peaceful. You get the idea. When I plan a composition ahead of time and critique the drawing as I’m working, my art tends to look manipulated. Contrived. Over-worked. I usually just draw, and rely on my instincts.

My cavalier attitude about composition should be qualified. It applies to figure drawings, which usually take 5 or 10 minutes to complete. When I do an oil painting or scratch hologram or sculpture which toke hours or days to complete, I certainly try to work out a good composition before I begin.

I don’t advocate any particular approach for composition. Everyone should find their own path when creating art and be true to themselves. Just keep doing it. You’ll find the way.

Here is a brief discussion of arts section of jimgrinter.com.

FIGURE DRAWINGS:  These are oil pastel and oil stick drawings on chipboard. They are all quick sketches from live models. There is a variety of style. Some pieces are quite minimal. Some are more finished. Some are contour drawings. Some are whimsical and cartoon-like. I work intuitively and don’t plan composition, style, etc. Whatever happens happens. I watch it unfold as I work. 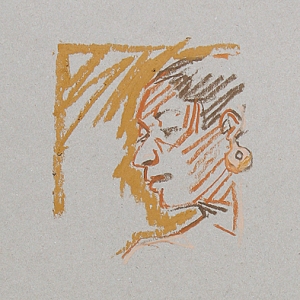 MINIS:  I had a request for smaller, more affordable figure drawings and started doing the minis. The image area of the minis is usually six to eight inches, as opposed to 2 or 3 feet for those in the figure drawing section. I like the look of the minis because of the bold strokes within a small frame. It has inspired me to make really large, fat oil sticks to use on the larger pieces.

ACRYLIC and OIL PAINTINGS:  Most are acrylic washes that were painted a couple decades ago. At the time I was trying to capture archetypal scenes of the midwestern United States and took many photographs to use as reference. The acrylic paintings are usually quite detailed and took days to complete. Most are now sold.

PHOTOGRAPHS:  I was asked if the photographs were taken with a pinhole camera because there is no depth of field. The focus remains sharp throughout the image. They’re not pinhole images. They are composites merged in photoshop from several dozen originals. To shoot the original pix, I stood in one spot and shot a series of photos while panning back and forth, up and down in grid fashion, keeping everything in focus. I then merged the small images into a single composite in photoshop.

The photograph of the river at Lawrence, Kansas, is unusual. I initially took a series of photos to use as reference for a painting but then didn’t do the painting. A decade later I decided to merge the pix into a composite, but I was missing pieces from the image. I returned to Lawrence and shot more pix to fill in the holes in the composite. It was easy to find the correct location for the camera because the rocks on the levee were in exactly the same location as a decade before.

The original river pix were shot during the summer and the second set in the winter, so some of the trees in the composite have leaves and some don’t. Also, some of the buildings changed. Because of the novelty of merging photos that didn’t match up, I decided to add little iconic images to the composite. If you move the enlarger around the Lawrence photo, you will be able to find the Loch Ness monster, a flying saucer from War of the Worlds, a pirate ship, Big Foot and dozens of other items hidden in the scene.

In future posts I will discuss the sculpture section, the kids book Uncle Lolly‘s Treasure, new art projects, updates to the website and other topics.